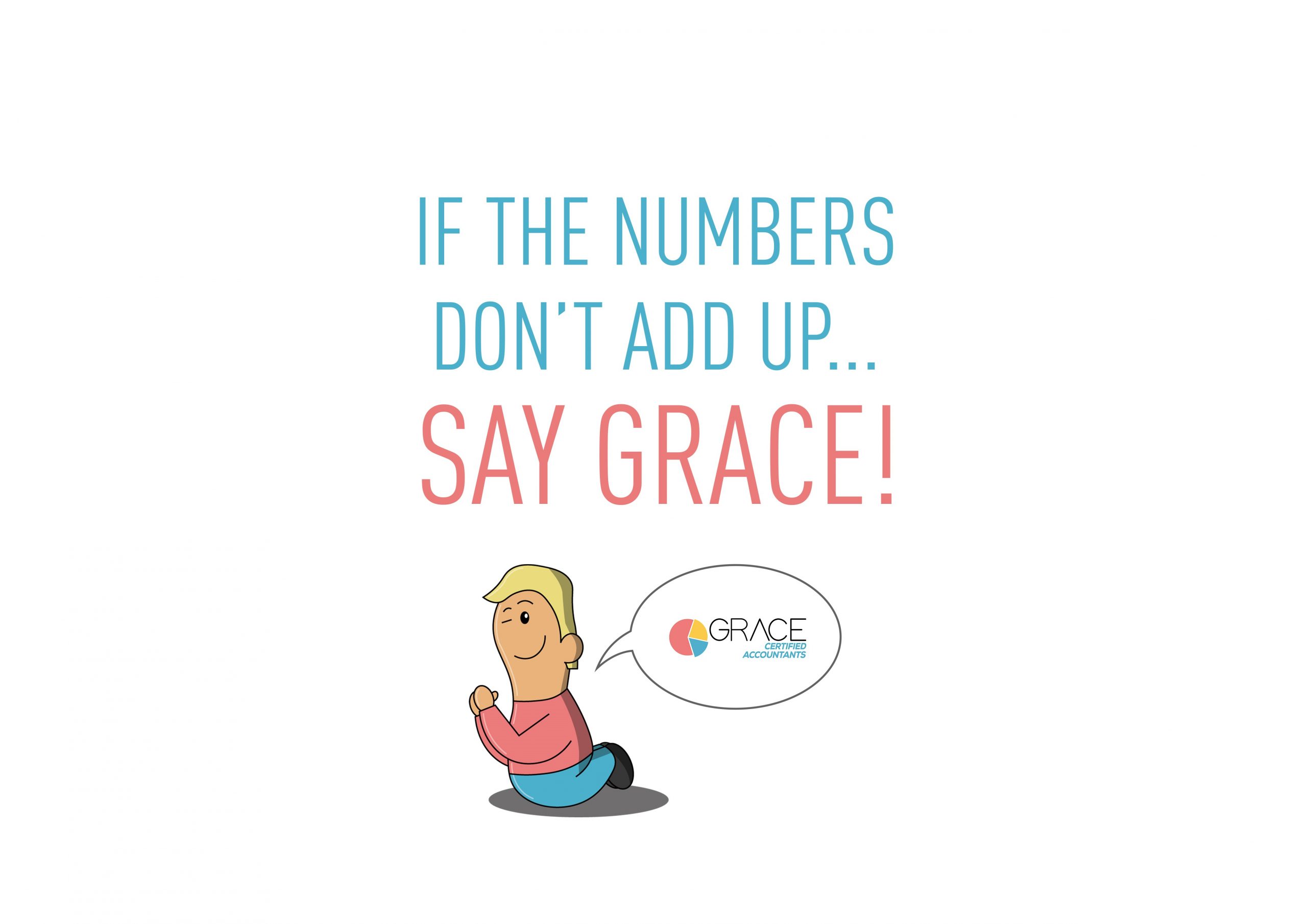 If the Numbers Don't Add Up — Say Grace

If there is one single thing that is essential for a business, it is that Your Numbers Add Up. If they don't, the consequences could be serious — perhaps even the end of your business.

Fortunately, there is an answer — say Grace.

Adding Up the Numbers

Even in terms of personal finance, making sure the numbers add up is crucial. This has always been true.

This is even more true for a business, except that, of course, you would hope your business makes a rather better profit margin than 0.125%.

The minimum requirement, though, is that your cash flow is positive — but how are you going to know, if you can't keep track of your numbers?

What Happens if the Numbers Don't Add Up?

The consequences of getting your numbers wrong in business can range from serious to dire.

If you are a Limited Company, for example, it could mean your official accounts are incorrect, and this might result in anything from a fine from HMRC to prosecution for fraud. It could very well mean the end of your business.

Even if you are a Sole Trader, though, and are not legally obliged to produce accounts, that does not make you safe. HMRC are entitled to request to see your financial records as a random check, and you can still be in trouble if the data does not tally with what you have declared in your tax return.

The pitfalls are not confined to tax, though. Imagine buying vital equipment or services for your business, only to find when you go to pay the invoice that your bank balance does not cover it. You thought you had plenty, but you hadn't been keeping up with the numbers and had missed several items of expenditure.

In the end, a business that cannot be confident about exactly how much cash it has at its disposal could well lose the confidence of the market. And that can be near impossible to recover.

The best way to avoid this is to hire an Accountant — but not any Accountant. Some may simply produce accounts taken at face value from the figures you have given them. If those figures are inaccurate to start with, the accounts will also be inaccurate.

What you need is an Accountant who will be actively involved in your business and ask you all the right questions to ensure they will get the correct figures. An Accountant like this will be almost part of your business, rather than simply someone you have hired to crunch a few numbers.

So, if you're having trouble getting your numbers to add up (or just want the peace of mind of knowing they will), then, say Grace — and give us a call.

I hope this information helps your business run more smoothly through these difficult times.

Please check out my other blogs for more advice on how to run your bookkeeping and accounts smoothly. Or take a look at us on Facebook and LinkedIn for more valuable insights.

We use cookies on our website to give you the most relevant experience by remembering your preferences and repeat visits. By clicking “Accept All”, you consent to the use of ALL the cookies. However, you may visit "Cookie Settings" to provide a controlled consent.
Cookie SettingsAccept All
Manage consent

This website uses cookies to improve your experience while you navigate through the website. Out of these, the cookies that are categorized as necessary are stored on your browser as they are essential for the working of basic functionalities of the website. We also use third-party cookies that help us analyze and understand how you use this website. These cookies will be stored in your browser only with your consent. You also have the option to opt-out of these cookies. But opting out of some of these cookies may affect your browsing experience.
Necessary Always Enabled
Necessary cookies are absolutely essential for the website to function properly. These cookies ensure basic functionalities and security features of the website, anonymously.
Functional
Functional cookies help to perform certain functionalities like sharing the content of the website on social media platforms, collect feedbacks, and other third-party features.
Performance
Performance cookies are used to understand and analyze the key performance indexes of the website which helps in delivering a better user experience for the visitors.
Analytics
Analytical cookies are used to understand how visitors interact with the website. These cookies help provide information on metrics the number of visitors, bounce rate, traffic source, etc.
Advertisement
Advertisement cookies are used to provide visitors with relevant ads and marketing campaigns. These cookies track visitors across websites and collect information to provide customized ads.
Others
Other uncategorized cookies are those that are being analyzed and have not been classified into a category as yet.
SAVE & ACCEPT